Which Compaction Attachment is Right for You? 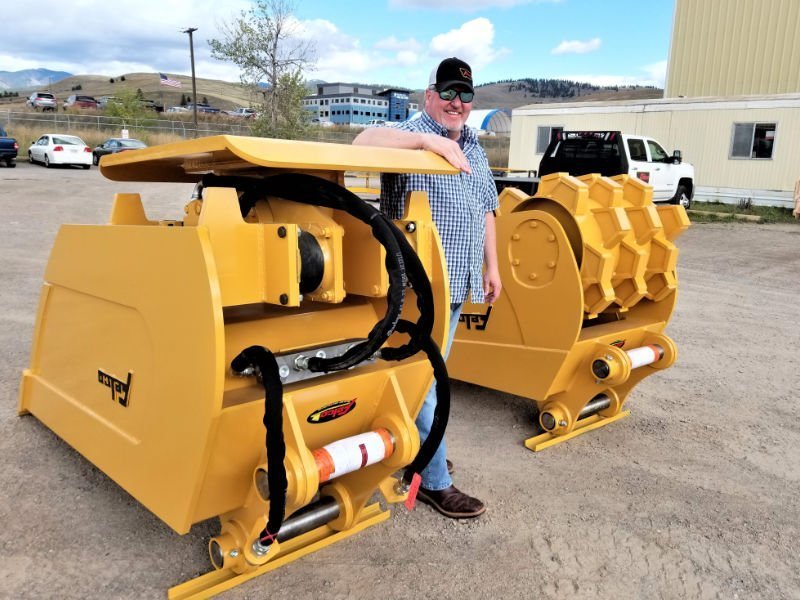 At Felco Industries, we are frequently asked which of our attachments we recommend for backfilling and compacting.  While we build exceptional compaction attachments, unfortunately, that is a tough question for us to precisely answer because there are so many variables involved with soil compaction, including soil type, soil classification, and moisture content.   However, here is a quick overview on compaction to guide your decision.

Static Compaction is the application of downward pressure or weight of an attachment/excavator combination to compress the soil to increase its density.  Additionally, by introducing a “kneading” element to the static compaction, which can be accomplished with tapered or specially designed bumps or tamping pads on a wheel drum, compaction can be accelerated and improved. This method is best suited for soils with measurable clay content.

Contractors report clay-based soils as the most common soil condition across the U.S. and Canada.  Felco’s static compaction attachment offerings include Felco Wheel Compactors and Felco Roller Compaction Buckets.  These are by far our most popular compaction attachments, and typically these methods are faster than compacting with vibratory compaction methods.

Felco Wheel Compactors, within a rigid exterior frame, feature a drum style wheel with specially designed, tamping pad bumps that are tapered to knead the soil.

Excavator operators use Felco Wheel Compactors typically when the extra extension range of the wheel is preferable, and contractors consistently report achieving 90% + compaction in most soil types throughout the U.S. and Canada.

Felco Roller Compaction Buckets allow an excavator operator to backfill open trench spoils and compact them with one attachment – by combining the compaction performance of Felco’s proven Tamping Pad Wheel Compactor within an excavator bucket shell.

Transition time switching between a digging bucket and a stand-alone wheel compactor is eliminated, adding up to significant time savings on long pipe jobs. Excavator operators can lay more uniform, compaction appropriate lifts with the Roller Bucket attachment, and they consistently report achieving 90% + compaction on projects throughout the U.S. and Canada.

Vibratory compaction forces the air in the soils to the surface with a combination of impulse force (measured in pounds) and frequency (cycles per minute) which decreases air pockets making it the preferred method for compacting granular soils.

Felco Vibratory Plate Compactors are the ideal tool when it comes to compacting on tight repair jobs, trenches, foundations, or slope applications.  Vibratory compaction forces the air in the soils to the surface which decreases air pockets making them ideal for compacting granular materials.  These vibratory units can apply from 3,500 to 40,000 pounds of impact force depending on size and model.  Each compactor vibrates at around 2,100 Cycles Per Minute or Frequency, which has been found to provide optimum compaction for the widest range of granular soils.

Felco Vibratory Compaction Buckets combine the compaction performance of a vibratory plate compactor with the versatility of an excavator bucket.

Excavator operators can lay more uniform, compaction appropriate lifts with the Vibratory Compaction Bucket attachment and they consistently report achieving 90% + compaction on projects throughout the U.S. and Canada.

Felco has you covered!

Ultimately Felco recommends using the compaction method that is proven to best work in the project area or is recommended by engineering specs.  Luckily, Felco has you covered either way.

Combine a Vibratory Compactor with a Digging Bucket!